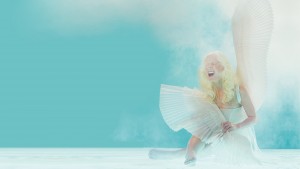 In Feather Mantle, a fisherman named Hakuryō goes fishing with his companions and finds a beautiful robe hung on a pine branch. When he attempts to take it home as a family heirloom, a celestial maiden appears and asks him to return the robe to her. At first, Hakuryō refuses to return it. However he is moved by the celestial maiden who laments that she cannot go home to heaven without it. The fisherman argues with her and finally promises to return it if she will show to him her dance or at least part of it. She accepts his offer and eventually disappears in the haze, beyond the peak of Mount Fuji – only the sound remains.